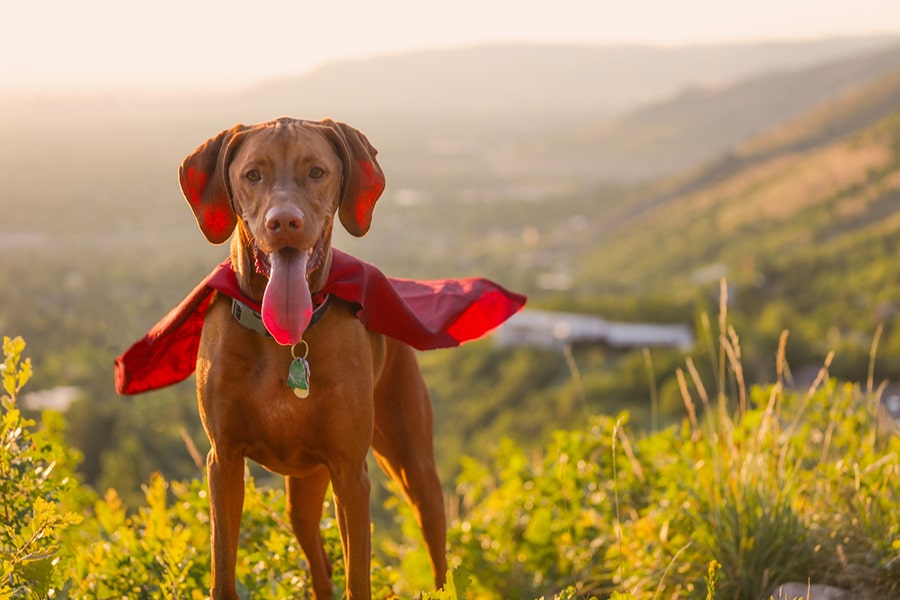 Is your dog worthy of a superhero cape? Not all dogs have the chance to save the day, but these canine heroes are superstars in our book.

Search and rescue dogs like Nahla help find people trapped under the snow after an avalanche. When Nahla picks up the scent of a person in the snow, she’ll start digging furiously. When she’s sure she’s found someone, she’ll run to her handler to alert him and then go back to digging.

Dogs who were bred to find and flush out game are perfect for this job. For instance, Darwin is a 9-year-old Nova Scotia Duck Tolling Retriever. He has no problem diving neck-deep into the snow to help rescue someone. 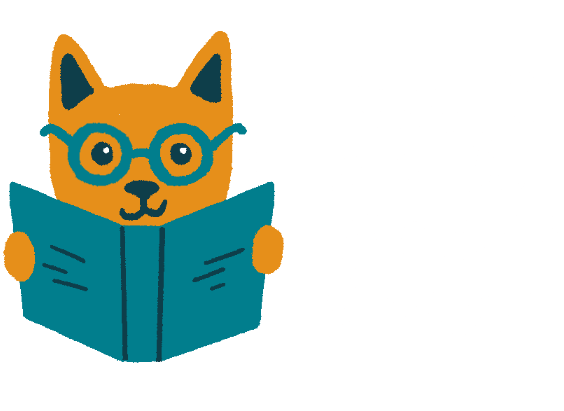 Aries pups are known to be strong and bold, which essential traits for heroic dogs.

Bear is a dog who saves koalas. How amazing is that? This Cattle Dog cross-breed was abandoned because of his obsessive-compulsive tendencies. His handler trained him to put those behaviors to good use rescuing koalas in Australia after devastating brushfires.

Those fires destroyed millions of acres leaving many koalas stranded without adequate food or water. Bear has a knack for finding koalas in the trees so they can be treated for any medical issues and moved to a better environment. He’s credited with saving hundreds of koalas.

When a man fell into an icy pond in Massachusetts, he was lucky that Diesel and his human were hiking nearby. This mixed breed dog heard the man’s cries and alerted his owner to the situation.

It was too dangerous to walk out on the ice, so Diesel’s owner quickly called 911 for assistance. While they waited, other people came across the scene. Working together, they were able to pull the man out with a large tree branch. If it hadn’t been for Diesel, he might not have survived. 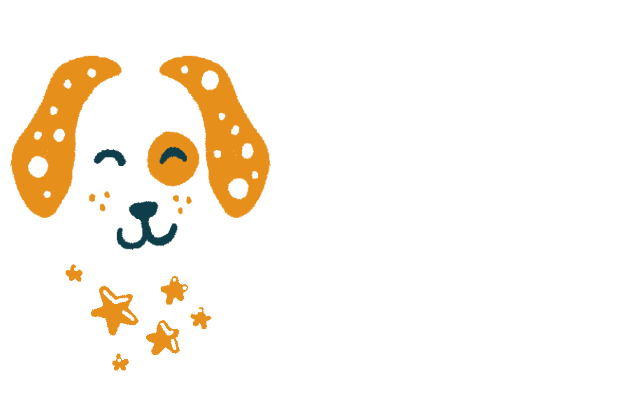 Show your dog you appreciate them using their favorite language of love, whether it’s time together, physical touch, or words of affirmation.

A mixed-breed dog named Ash was hiking with his owner in the Italian Alps on what seemed like an uneventful adventure. Suddenly, his owner fell and broke his ankle. He had no cell service to call for help, but he did have sweet Ash to keep him warm and hopeful.

This hero dog and his owner spent seven cold nights snuggled together for warmth until mountain rescuers found them. His owner credits Ash for keeping his spirits up during the long wait for help.

Pets help our mental health in so many ways. Take Haatchi, for instance. He’s an Anatolian Shepherd who was tied to railroad tracks by an abusive owner. He was hit by a train and lost his leg in the accident, but he did not lose his spirit.

After he healed, Haatchi was adopted by a caring family who has a young son with a rare genetic disorder. This condition causes the boy’s muscles to tense up, and he uses a wheelchair to get around.

The boy was inspired by Haatchi, who didn’t let his missing leg slow him down. He grew more confident and outgoing with loving Haatchi by his side. A short documentary was created about this pair, which has touched people around the world. 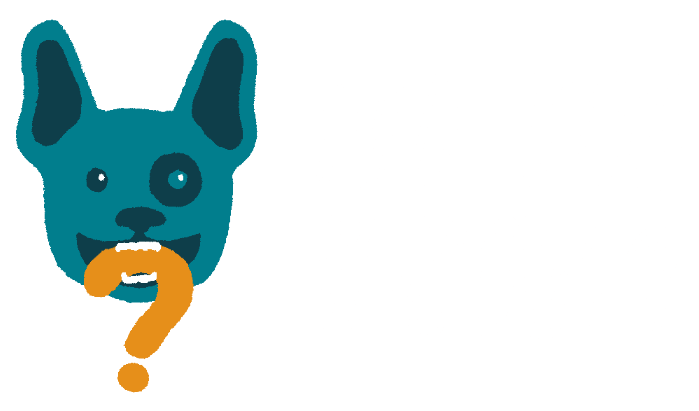 Cats can be heroes too. They’ve been known to save their families from fire and keep babies from tumbling down the stairs.

Fitz is a service dog who helps children and adults after they’ve experienced a traumatic event, such as an assault or robbery. He has a soothing presence that can help them open up about what happened to provide police with vital information or as part of their recovery.

Fitz works in all sorts of settings, including police stations, courthouses, and child advocacy centers. He knows tricks like bowling and turning pages of a book that help put people at ease. Fitz’s handler says that children are often able to tell this hero dog things they’re reluctant to share with adults. 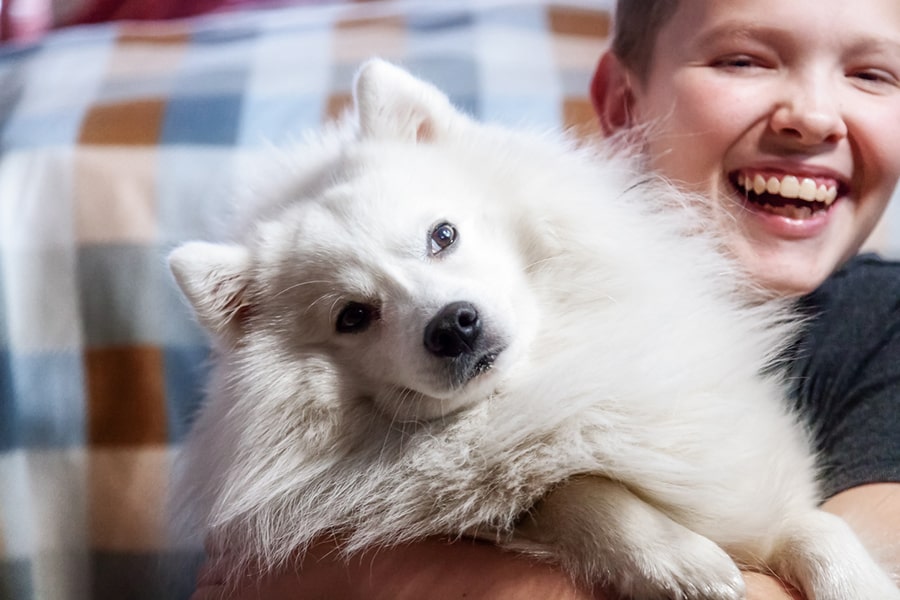 Pups like Honey and Sadie have an uncanny ability to know when something is wrong with their human.

Morley welcomed a young Pomeranian named Honey into her home on Thanksgiving Day—and she’s so thankful she did. One evening when Morley wasn’t feeling well, she tried to climb into bed to rest. Honey wasn’t having it. This typically calm pup growled, barked, and pawed at her to stop her from going to sleep.

Morley realized Honey was trying to tell her something, and she decided to go to the hospital. The doctors there told her she had suffered a mild heart attack. If Honey hadn’t reacted the way she did, Morley might not have survived.

Sadie had been turned away from three shelters because of unwanted behaviors. It seemed like nobody was willing to give her a good home until Brian Myers came along. He decided to take a chance on Sadie, and he’s very glad he did.

One night, Brian suffered a stroke and fell to the floor. He knew he needed help, but he couldn’t get to his phone across the room. Sadie suspected something was wrong and managed to pull Brian to his phone so he could call 911. Brian saved Sadie when he chose her at the shelter, and Sadie certainly returned the favor.

Haley was out walking her Maremma mix Clover when she had a seizure and landed next to the curb. This hero dog backed into the road to keep Haley safe from oncoming cars. A truck driver coming down the road saw Clover and stopped to help Haley.

Haley recovered fully, but her doctors are not sure why she had the seizure. While she’s hopeful she won’t have another one, she’s confident that Clover will protect her if it happens again.

Buddy began acting strange right after his owner Clifton dozed off on the couch. He leaped up onto Clifton’s chest and started barking loudly. That’s when Clifton saw the billowing smoke and knew there was a fire in his home.

He was able to get to his wife, who was sleeping in the other room, and run out of the house together. Buddy got scared and hid in the house, but firefighters were able to find him and get him to safety. Clifton and his wife are thankful for the quick thinking of their hero dog.

If your dog gets hurt in a heroic act, pet insurance can help you cover the cost of treatment.

Chloe is a 9-year-old girl who’s had dozens of surgeries since she was born. When one of her surgeries was delayed due to the COVID-19 pandemic, her parents decided to adopt a dog. It turned out to be perfect timing.

They found Cookie at a shelter. She was trembling when she first met her new family, but she and Chloe quickly fell in love. Cookie has become Chloe’s emotional support dog. She’s given Chole an extra boost of confidence and made it easier for her to get through the postponed surgery.

If your pooch gets hurt and needs blood, you’ll be thankful for dogs like Douille. This Wisconsin pup donates blood so that veterinarians can save the lives of other dogs. But don’t worry—it’s not painful for Douille. He doesn’t seem to feel the needle or mind it all. And he appreciates the treats and praise afterward.

Paws up for Douille and all of these heroic dogs!

See how pet owners are paying for their pet’s care.

Pet Love Languages: How to Show Dogs and Cats Love

Our dogs eat the strangest things. Find out what’s safe and what’s not.

Check out the latest trends in pet health and wellness.